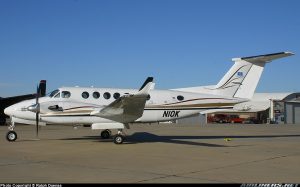 Oklahoma’s  King Air plane used to fly governors around the state and the country will be for sale as a result of the first executive orders Gov. Kevin Stitt announced on Thursday.

He told reporters at a Thursday morning capitol news conference that the move will save the state money, explaining, “The dollars t hat cost per hour to operate that….if you’re not flying 400 hours a year,  it just doesn’t make sense to own your own airplane.”

Gov. Stitt explained he will rely on donations of private flights and if they cannot be secured, he will fly commercial. And he admitted he’s exploring the possibility of selling his own personal aircraft.

The governor explained his executive order directed the Department of Public Safety to sell the plane and that he will “continue to travel the state and will be reviewing more cost-efficient ways to get out to communities in all 77 counties.”

Former Gov. Mary Fallin used the King Air extensively for her travels as well as those of her family. Oklahoma City TV station Fox 25 reported in April 2018 how the plane was used by the governor’s family when she was not on board. It flew them to and from the governor’s lake house at Grand Lake in northeast Oklahoma. (click here for story)

The King Air is a Beechcraft Model 300 and the airplane was manufactured in 1990. Fox 25 reported, the estimated cost of flying the plane was $1,300 an hour but the governor’s office disputed the cost and said it was closer to $800 per hour.

Gov. Stitt also ordered a hiring freeze of classified employee positions and will require more transparency from state agencies. In the news conference at the Capitol, Gov. Stitt said his transparency order includes a requirement that state agencies, commissions and boards supply him with a list of all lobbyist contracts and their amounts.

The order came after the governor learned such information about lobbyist contracts was “not readily available or accessible.” His action should not be considered a surprise since he campaigned on such a move and referred to it in his inauguration speech in early January.

“We can only guarantee such accountability when state agencies understand that they exist to serve and to answer to the people of Oklahoma,” said the governor in the address.

With the hiring freeze, Stitt is asking for a full review of agencies, boards and commissions “to help identify needs for each entity to deliver services effectively and efficiently.