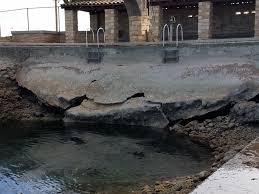 From the Associated Press:

An oil and gas company operating in West Texas has donated $1 million to reach the fundraising goal for repairs to what’s touted as the world’s largest spring-fed swimming pool.

About $2 million in repairs continue at Balmorhea State Park pool. Executives with Apache Corp. presented a check to the Texas Parks & Wildlife Foundation in Austin.

The historic pool, located 120 miles southwest of Midland, has been closed since last May after a partial collapse during cleaning. Experts blamed erosion linked to flow from San Solomon Springs.

Officials in August announced a fundraising effort for repairs to the pool built by the federal Civilian Conservation Corps in the 1930s.