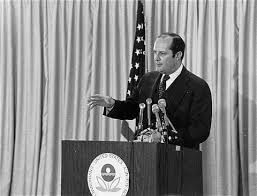 A man who was considered to be one of the founders of the U.S. Environmental Protection Agency died last week in Virginia.

Douglas Costle was the EPA administrator during the Carter administration.  Previously, he was a senior staffer for President Nixon’s advisory council on reorganizing the executive branch and led the study that recommended founding the EPA. Nixon did so in 1970 and picked William Ruckelshaus as the first administrator.

Ruckelshaus consulted with Costle frequently about the EPA. Then in 1977, Costle was nominated by President Carter to run the agency and he was unanimously confirmed by the Senate. Costle was 37 years old at the time.

Once at EPA, Costle was at the helm during some of the country’s defining environmental disasters, like the dumping of chemical waste in Love Canal, N.Y.

Costle was hampered by illness in later life. He had a stroke in 1999 and another in 2014, his wife, Betsy, said. He lost his ability to speak and used a wheelchair.