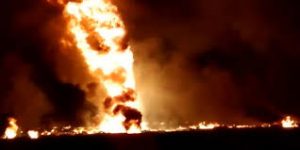 The death toll is up to 85 from a massive weekend explosion at an illegal tap of a gasoline pipeline north of Mexico City.

Another 58 are still hospitalized and some are in serious conditions.

Dozens were attempting to scoop up gasoline after a break caused a geyser of gasoline to soar into the air. While the many were around the break in the line, it erupted into a massive explosion.

The fire was so intense that only burned bones remained of some of the victims.

The blast happened in a municipality about 70b miles north of Mexico City and only 13 miles from the Tula refinery. The refinery is one of six owned and operated by state oil company Petroleos Mexicanos or Pemex.