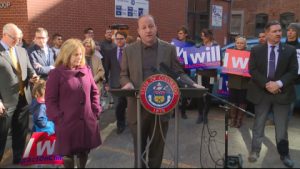 Colorado’s Gov. Jared Polis has signed his first executive order as Governor and it focuses on the state’s conversion to electric cars.

“Our goal is to reach 100 percent renewable electricity by 2040 and embrace the green energy transition already underway economy-wide,” said Polis.

The executive order has a goal of getting more Colorado drivers into electric cars. it outlines initiatives and strategies to reach the goal. The initiatives include providing less expensive options for electric cars.

CADA President and CEO Tim Jackson said, “We trust Colorado consumers, who care about the environment as much as anyone, to be able to freely choose to buy the vehicles that they need at home or work. These consumers range from rural Coloradans who farm and ranch to suburban parents who need to transport the Little League or soccer team. Three-quarters of Coloradans choose vehicles from the light truck category, which includes pickups and SUVs, to meet Colorado’s challenging driving conditions. There is a reason you don’t see electric vehicles pulling horse trailers or hauling six kids to their events.”

But Polis maintains the demand for zero emission alternatives is there.

“Despite the fact that Colorado has some of the highest consumer preference for electric vehicles,” countered Polis, “still many manufacturers don’t sell all of their models here, and instead offer them in states that have adopted the ZEV [zero emission vehicle] standard.”