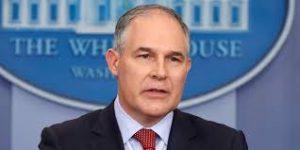 When Scott Pruitt resigned as Administrator of the Environmental Protection Agency, one environmental group not only was elated but took credit for forcing him out of office. Now it’s using Pruitt’s resignation in an effort to raise money.

The Environmental Integrity Project, lead by Executive Director Eric Schaeffer is using Pruitt’s departure and what led to it as a means to raise donations.

“Our Investigations Helped Force the Resignation of EPA Administrator Scott Pruitt,” read the headline in the fund-raising pitch.

The EIP claimed it was the first organization to file Freedom of Information Act requests and lawsuits against the Trump EPA to obtain the documents that “exposed his wasteful spending, billing taxpayers for high priced travel for his own political or personal benefit, and his cozy and unethical relationship with polluting industries.”

“Our investigations sparked two federal probes of  Pruitt by the EPA Office of Inspector General and the House Oversight and Government Reform Committee. We released the documents to the news media-inspiring snowballing press coverage, more than 2,000 news stories and contributing to Pruitt’s resignation on July 5, 2018.”

The Environmental Integrity Project is 16 years old and claims to be a nonpartisan and a nonprofit watchdog organization.