Chesapeake wraps up nearly $8 million in buyback of shares 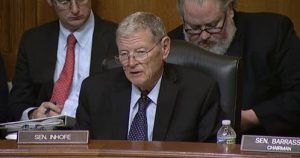 Oklahoma U.S. Sen. Jim Inhofe says nothing is new from Democrats as far as climate change demands are concerned as Democrats prepare to take over the House.

He’s expected to play a key role in any infrastructure push in the coming year and downplayed demands made by Minority Leader Chuck Schumer for climate change policies in the package.

“They’ve had this position now for so many years, so this is not a change,” he recently told reporters on Capitol Hill.

But the ranking Democrat on the Senate Environment and Public Works Committee, the one formerly chaired by Inhofe who is a senior member wants the business community to speak up.