FERC nominee confirmed in a close US Senate vote 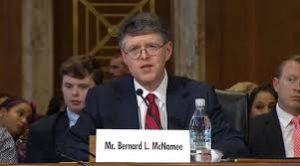 With “yea” votes from Oklahoma U.S. Senators Jim Inhofe and James Lankford, the U.S. Senate has confirmed President Trump’s pick for a key energy agency over objections from Democrats that the man is too biased.

It was a 50-49 vote along party lines when Bernard McNamee was confirmed to the Federal Energy Regulatory Commission. He is a Republican and former high-ranking political official at the Energy Department.

Democrats were opposed to his nomination because of his history in the Trump administration and that he worked for the conservative Texas Public Policy Foundation.  Senate Minority Leader Charles Schumer of New York was especially pointed in his opposition.

“He has lied about how the renewable energies impact the electric grid. He has called support for clean energy ‘organized propaganda,’ and pitched the debate between fossil fuels and renewables in his words as a clash between liberty and tyranny,” said Schumer on the Senate floor before the vote. “My Republican friends, these words sound absurd.”

Schumer added, “At a time when average Americans are feeling the devastating effects of climate change right now, we should not elevate someone so biased in favor of fossil fuels that caused these problems in the first place.”

McNamee has been an outspoken advocate of fossil fuels, harshly criticized renewable energy and cast doubt on the science of climate change, including in a video of a speech that surfaced in recent weeks. He also served a key role in pushing the Trump administration’s ongoing attempts to bail out coal and nuclear power plants.

But Senators Inhofe and Lankford were among those who believe McNamee is a highly qualified candidate who can keep his personal opinions in check.

“His obvious qualifications and his commitment to fairness and impartiality earned him a bipartisan vote out of the Energy and Natural Resources Committee last month with a favorable recommendation,” said Senate Majority Leader Mitch McConnell (R-Ky.) “I hope the same common sense will prevail today so we can move this nominee forward with the bipartisan vote he well deserves.”

That bipartisan committee vote was due to Sen. Joe Manchin (D-W.Va.), who told McNamee in his confirmation hearing that he supports his past statements on fossil fuels and coal.

But Manchin voted against his confirmation due to the video, first published by Utility Dive, and McNamee’s apparent doubt of climate change science.

“After viewing video footage, which I had not previously seen, where Bernard McNamee outright denies the impact that humans are having on our climate, I can no longer support his nomination to be a FERC commissioner,” Manchin said in a statement Wednesday, after voting against a procedural motion to move forward on the confirmation.

“Climate change is real, humans have made a significant impact, and we have the responsibility and capability to address it urgently,” Manchin said.