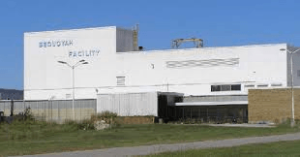 Over 500 truckloads of contaminated sludge were removed from the former Sequoyah Fuels uranium conversion facility in Gore last week, marking the end of a 15-year legal battle, according to a report by The Tulsa World.

The sludge will be stored at a Utah site that has already received more than 10,000 tons of nuclear waste from the closed facility in Gore.

“I’m very pleased to see this done because there were many times we thought we might never get to this point,” said Sara Hill, Cherokee Nation secretary of natural resources.

Kerr-McGee opened the Sequoyah Fuels uranium conversion facility in 1970 along the Illinois River. The 600-acre facility processed uranium into fuel for nuclear reactors. Following a 1986 fatal explosion and several lawsuits, Kerr-McGee sold the facility to General Atomics Technologies Inc. in 1988. The plant closed in 1993 after groundwater and soil contamination issues were discovered onsite.

“It is a historic day for the Cherokee Nation and the state of Oklahoma,” said Chuck Hoskin Jr., Cherokee Nation Secretary of State. “Our lands are safe again, now that we have removed a risk that would have threatened our communities forever.”

In a 2004 settlement agreement with the state and Cherokee Nation, Sequoyah Fuels agreed to spend up to $3.5 million to relocate the solid wastes. While searching for a proper storage facility, the sludge was bagged, covered and stored for more than a decade on concrete slabs at the site, according to The Tulsa World.

In 2016, the company revealed that it could not locate a storage facility for the materials so it proposed to bury the sludge in a U.S. Nuclear Regulatory Commission-approved storage pit onsite. That did not sit well with the other litigants. In 2017, the state and Cherokee Nation were successful in winning a restraining order prohibiting the onsite burial. Sequoyah County District Judge Jeff Payton directed the parties to meet weekly in order to develop a solution.

“We didn’t want it buried right there at the confluence of the Illinois and Arkansas rivers,” said Hill.

The White Mesa Mill in Blanding, Utah, was the only site in the United States capable of handling the material. In late 2017, the mill completed the required facility update and licensure requirements needed to accept the materials.