Voters send Rep. Mullin back to Congress for another term 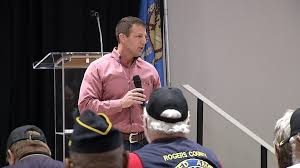 One of Oklahoma’s Republican congressmen who is a voice for the energy industry in the U.S. House won re-election on Tuesday.

Second District U.S. Rep. Markwayne Mullin was easily sent back to the House with 65% of the votes. He is a member of the House Energy and Commerce Committee and defeated Democrat Jason Nichols, Independent John Foreman and Libertarian Richard Castaldo.

Mullin’s 65% support came a year after he created a controversial storm in announcing he would seek a 4th term in congress. In 2012, he promised to serve only three terms in office but changed his mind in the summer of 2017. He used an eleven-minute video to explain why he would not abide by the promise and said he had been “ill advised” when he made the original promise.