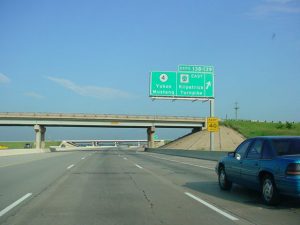 State highway crews have launched a $55 million project to widen the Kilpatrick turnpike on the west side of Oklahoma City near Yukon and Mustang. And it means an eventual end to bridges that left motorists riding one wave after another as they traveled across the North Canadian River.

Crews started last week on widening four bridges from Wilshire Boulevard south to a new extension.  Jack Damrill, a spokesman for the Oklahoma Turnpike Authority indicated the project will take two years to complete and be funded by toll payments.

The project will eventually extend to Airport Road in Oklahoma City, offering an alternate route to the airport and bypass the interstate system.

“To continue to provide the safest possible passage and the best level of service to the traveling public and our Pikepass customers, we are needing to continue with the turnpike widening initiative that was started on the northern Leg of the John Kilpatrick Turnpike between Eastern Avenue and MacArthur Boulevard,” said Damrill.

He explained the complete widening project for the west section has yet to be scheduled, adding that the North Canadian River and overflow bridges “present very challenging traffic management issues for widening even under current traffic conditions.”

Two of the four bridges to be widened cross the North Canadian river while two others are near the Wilshire Boulevard exit.

As a result of the project, those ‘bouncing’ bridges will be replaced, ending the dozen or more bounces endured by motorists when they drive over the bridges.  Damrill called them “waves” explaining the decks and steel beams will be replaced.

Some years ago, Turnpike Authority engineers maintained the ‘waves’ were the result of manufacturing and it did not mean the bridges were any less unsafe.

In August of 2012, the author wrote this story about the ‘bouncing’ bridges for the Oklahoma City Gazette:

“State Turnpike Authority officials now confirm it was what they call a ‘design flaw’ that led to two multi-million dollar bridges, one in Canadian County near Yukon and another in Creek County near Broken Arrow, to produce a bouncing ride for motorists. Some drivers call them the ‘bouncing bridges’ and the rolling waves are so prominent that heavy trucks have left a series of black tire marks on the bridges and resulted in complaints and inquiries to state officials. The Kilpatrick is bad enough that one driver produced a Youtube video and called it the ‘Bobblehead’ bridge. What is unclear is why the state built the first bridge with its mistakes in 2001, then three years later, did the same thing on the second bridge.

The first bridge, complete with its waving ride was built on the Kilpatrick turnpike just south of the North Canadian River near Yukon.  Completed in March of 2001 at a cost of $10,273,000, it is 3,200 feet in length. The contractor was the Muskogee Bridge company, a firm bought three years ago by the Manhattan Road and Bridge Company.  Three years later, the Turnpike Authority constructed a 4,950 foot long bridge over Haikey Creek on the Creek turnpike near Broken Arrow. The six-lane bridge, opened in March of 2004, was built at a cost of $20,207,356 by Interstate Contractors, a now-defunct construction company out of Durant. Records with the Secretary of State’s office indicate Interstate Contracting Corporation was formed in 1988 and the firm was dissolved within the past several years.

Motorists on each are greeted by a continuous series of bounces as they pass over the beams that make up the bridges. In the Kilpatrick case, there are at least 20 significant bounces and scuff marks from bouncing truck tires can be seen in each of the dips.  Yet Turnpike Authority officials vow the bridges are safe and the bouncing ride offers no more wear and tear on vehicles than any other bridge.

“It’s a safe bridge,” said Tim Stewart, Turnpike Authority Deputy Director in referring to each, “but the ride is not what we want.”  He also confirms the Turnpike Authority considered legal action against the two construction companies but decided its own construction and design criteria modifications were as much at fault as the contract engineers who designed the bridges and the firms that built them. “There was not a clear individual culprit why these bridges didn’t ride as smooth as they should be,” he stated. “There just wasn’t a clear smoking gun or silver bullet.”  So the Turnpike Authority chose not to go to court, realizing it stood as good of a chance at losing a lawsuit as winning it.

The bridges were among 92 construction projects the Turnpike Authority contracted in early 2000 at a cost of $690 million. At the time, Stewart was the Director of Maintenance for the Turnpike Authority. He explained the Authority’s own engineers were in the process of modifying their load based designs when the contracts were let.  Turnpike Authority experts wanted slight changes in the camber or bend of the long beams that comprise the bridge. Bridge beams are normally built with a slight upward arch and are expected to lower or straighten out once the cement is poured on them.  As a result of state design changes, the deflection rate would be changed. Deflection is how much the bend would settle down and flatten out under the weight of the concrete, according to Stewart.   “We don’t want them to over-deflect because that could then weaken the beam. Ninety-five percent we get right,” he added. “When we don’t, you’ll experience a rough ride.” But in the cases of the bridges on the Creek and Kilpatrick turnpikes, the experts could not put a finger on just what caused the bouncing ride and why the beams didn’t settle.  And after contemplating legal action, the Turnpike Authority decided against it. “We agreed to share responsibility,” said Stewart. “We didn’t feel strong in going to court.”

The beams in question were produced at steel plants in Tulsa and Houston, Texas.  “When we started running into problems,” said Stewart, “we had beams shipped in from Texas. But we also had an independent testing lab check them.” Each beam was looked at twice by an engineer before it went onto the bridge.

The State considered other options including making the contractors tear down the new bridges and rebuild them. Or it could have used what Stewart called a “high density overlay”, in other words, more concrete. But the high density overlay might have shortened the life of the bridge and the beams. So the state decided to leave the bridges as they are—complete with the bouncing ride.

“Are they safe? The answer is ‘yes’,” said Stewart. “Are we compromised? Will we have problems long term? No.”  Stewart admits the ride is substandard, but not the bridges.  The black scuffs from truck tires can be seen on both, caused when trucks hit the first wave then bounce upward.  When it settles into the dip, the spinning tires leave the black marks on the roadway.