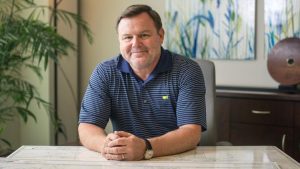 The leader of one of the major pipeline and storage companies at Cushing, Oklahoma has been named Entrepreneur of the Year 2018 in the Energy and Natural Resources category.

David Dehaemers Jr. is President and CEO of Kansas City-based Tallgrass Energy, LP and was honored this week in Palm Springs, California. The award honors entrepreneurs who are forging a better future through products, services and jobs that keep the worlwide economy and communities moving forward.

Dehaemers was chosen by an independent panel of judges and the award was presented at EY’s Strategic Growth Forum.

“Being named an EY Entrepreneur Of The Year is particularly meaningful to me because it’s an entrepreneurial spirit across our company that made Tallgrass Energy into what it is today,” said Dehaemers. “I’m very proud to lead an organization filled with individuals who think entrepreneurially, embodying one of our essential values – growth.”

Dehaemers was selected for this national award from more 1,300 applicants nationwide. He was named a regional Entrepreneur Of The Year winner in the Heartland region in June 2018.

EY has celebrated entrepreneurial excellence by honoring those innovators and prominent leaders who have contributed and inspired others with their vision, leadership and achievement since 1986. Their companies have succeeded, invigorating their industries and benefitting their communities, while also encouraging others to follow their lead. In 2018, the 231 award winners represented 187 entrepreneurial companies, employing more than 213,000 people with a job growth of 46 percent. They generated revenue of more than $66 billion, with revenue growth increasing more than 56 percent.