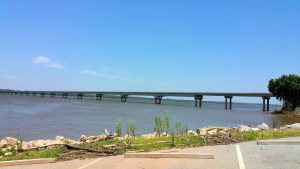 A new $43 million bridge will be built to replace a mile-long bridge over Lake Texoma following approval of a contract this week by the Oklahoma Department of Transportation.

The Transportation  Commission approved the contract with Jensen Construction  Co. of Sand Springs to replace the 58-year old bridge spanning the border between Oklahoma and Texas.

The bridge sits between Madill, Oklahoma and Whitesboro, Texas and has been declared structurally deficient.

Anthony Echelle,  division engineer for ODOT said the bridge is showing its age.

“Occasionally holes appear in the bridge deck and we have to make repairs.”

Construction could begin in six to eight weeks and take nearly two and a half years before completion.  The new bridge will be 5,462 feet in length and have 12-foot wide driving lanes and 10-foot wide shoulders.

The new bridge will go up beside the existing Willis bridge so traffic will not be disrupted or halted. To assist boats pass under the bridge during times of high water, the new bridge will be sloped upward to where it will be nearly 80 feet above the lake bed.

Since the two states share the bridge, they will also split the costs.