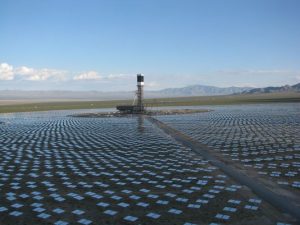 Days after agreeing to pay more than $2.2 million in taxes owed in Kay and Grant Counties in Oklahoma, the EDF Renewables Company announced the signing of a 15-year power purchase agreement with Shell Energy North America.

EDF’s Palen Solar project located in California will supply the electricity by the end of 2020. The 100 megawatt farm is known as Maverick 4 Solar Project.

The Palen Solar farm is located in Riverside County, California on 3,140 acres of federal land within a Solar Energy Zone and Development Focus Area managed by the U.S. Bureau of Land Management.

The government recently completed the federal permitting process which put in motion the construction of the project.

It was last week when EDF Renewables reversed its stand against paying millions in taxes to school districts and local governments in Kay and Grant Counties. The $2.2 million in taxes were owed on the company’s Rock Falls Wind Farm near Blackwell.

EDF initially argued the farm was exempt from taxes but company officials met with school district leaders in the two counties and relented. A company spokesman explained afterward, “The conversation with the superintendents had an impact with us and the message they delivered was received from our CEO to those working in the field.”

EDF Renewables is one of the largest renewable energy developers in North America with 10 gigawatts of wind, solar, and storage projects developed throughout the U.S., Canada, and Mexico.