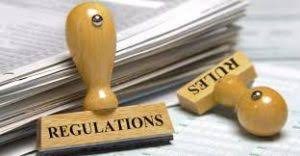 Emergency wind rules are being taken up by the Oklahoma Corporation Commission following the controversial stoppage of construction of a Hinton wind farm because it appeared to violate a new state law designed to protect military flight spaces.

New rules were adopted earlier in the month but there have been additional changes so the rules comply with the Oklahoma Wind Energy Development Act.

The quick action comes as the State Attorney General and the Department of Defense continue their negotiations with NextEra Energy over a wind farm under construction near Hinton. The State Aeronautics Commission contends the farm is in violation of the law and for the past two months, a mitigation plan has been the focus of ongoing negotiations with the company.

The latest changes before the Corporation Commission focus on the determinations of no hazard by the FAA and the mitigation plan.

One rule change would give power to the Corporation Commission to take action against any firm that would begin construction or expansion of a wind farm without getting prior approval that it does not interfere in military flight training routes.