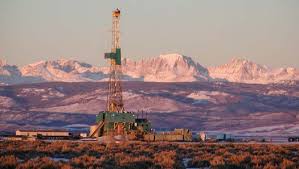 The oil and gas industry is getting a lot of the credit for driving the state of Wyoming out of its economic bus, and those Oklahoma companies exploring there have played a big role. Not to mention the midstream operations that move the crude from Wyoming southward to the Cushing hub and eventually to the Gulf Coast refineries.

Unemployment continues to tumble in parts of the state even though Wyoming’s jobless rate is 4.2 percent, higher than the U.S. rate of 3.7 percent. Observers note that Wyoming’s climb out of the simultaneous bust in coal, oil and gas yet not filled the gaps in jobs and state income created by the downturn, according to a report in the Casper Star Tribune.

But improvements are being made and most of the credit is going to oil and gas.

In just one month — from September to October — the unemployment rate in Sweetwater County — a focal point for gas development — fell from 4 percent to 3.5 percent, according to the Wyoming Department of Workforce Services.

Converse County’s unemployment rate also dropped from 3.6 percent to 3.1 percent. Converse is the richest area for current and anticipated oil and gas drilling and production in the state. The county hit a three-year record for applications for drilling permits in March, when more than 1,000 applications were submitted to the state.

In total, Wyoming has been flooded with a record number of applications, reaching 18,000 at one point recently. The influx is caused by producers jockeying for control of drilling and spacing units in Wyoming, where current rules favor first come, first served. Many of those applications will likely not result in actual drilling, according to state regulators.

There are currently a handful of rigs operating in Sweetwater County located in southwestern Wyoming, as well as the first utility-scale solar farm, which is under construction on 700 acres of mostly federally owned land near Green River. The project’s construction and early operation was anticipated to create between 150 and 300 short-term jobs.

Beyond employment, many workers are making more money per week, both in terms of their wages and the number of hours they are working, according to the Wyoming Economic Analysis Division, which creates a formula charting unemployment, wages, mining taxes and national park visits to provide a summary grade for the state’s economy. In September, due in part to the rise in private sector wages, the state’s economy continued on a positive pace that’s held since April 2017.

The mining sector is driving sales and use tax income up from its downturn lows. From January to September, total mining collections exceeded the three-year average for those months by 14.8 million.

More than 7,000 jobs have been added to the private sector in Wyoming since September of last year.