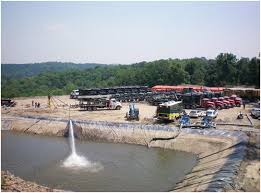 The drought is gone in Oklahoma, but not in New Mexico where state officials are considering a plan to allow the re-use of oil and gas drilling wastewater.

Instead of returning it to the earth through wastewater disposal wells, some wonder if it can be safely recycled, according to the following report by the Associated Press.

With drought a constant consideration for New Mexico, state and federal officials are warning that decisions about water are growing more complicated and opportunities to tap untraditional sources should be considered.

The state, with the help of the U.S. Environmental Protection Agency, has drafted a document that outlines areas where regulations can be streamlined to encourage the treatment and reuse of wastewater that comes from oil and natural gas operations.

The white paper released late last week says oil and gas production in New Mexico generated nearly 38 billion gallons (143 billion liters) of wastewater in 2017. As the boom in oil production continues in the Permian Basin’s well fields along the Texas-New Mexico border, officials say so will the amount of wastewater — known in the industry as produced water.

“Our effort to clarify the state and federal regulatory landscape dealing with produced water will facilitate greater produced water reuse and recycling and in turn help relieve the growing demand on the state’s water resources,” state energy secretary Ken McQueen said in a statement.

Aside from highlighting New Mexico’s rise in 2018 as one of the largest oil-producing states in the U.S., the document outlines the arid state’s challenges with drought.

Receiving an average of slightly less than 15 inches (380 millimeters) of rainfall a year, New Mexico is already the fifth driest state in the nation, according to the National Oceanic and Atmospheric Administration. That aridness was exacerbated this year as runoff along the Rio Grande and Pecos rivers marked some of the lowest levels in decades. Water managers were forced to broker deals to keep the Rio Grande flowing through the state’s most populous city.

“While conservation plays an important role in managing the state’s limited water resources, it is not enough,” the authors of the white paper wrote.

In New Mexico and other parts of the West, some stakeholders are asking whether production water from the oil and gas industry should continue to be treated as wastewater. Critics have voiced concerns about the lack of knowledge about the potential toxicity of the water.

The water usually contains chemicals, metals and other dissolved solids. Most of it is disposed of by injecting it deep underground, where it can no longer be accessed or used. In some cases, it can be reused in the oilfield for other drilling processes.

For every barrel of oil, it’s estimated four or five barrels of produced water are generated.

The state and the EPA are looking at what steps would be needed to treat it for other purposes, acknowledging that there are still health and environmental questions that need to be answered if the water were to be used beyond the industry.

State and federal officials began working on the white paper in July in hopes of clarifying existing regulatory and permitting rules related to the way produced water can be reused and recycled.

The state is working to finalize the draft before the end of the year.

Robert McEntyre, a spokesman for the New Mexico Oil and Gas Association, said some companies already reuse the water for their own purposes.

“What New Mexico lacks right now is the regulatory framework to be able to address using it for other purposes,” he said. “Certainly there’s an opportunity and given the growth we’ve seen, it could be a game-changer if the regulations catch up to where industry is.”