A state legislator is asking the Colorado Attorney General to investigate Gov. John Hickenlooper for allegedly flying on a corporate jet owned by Tesla to visit its plant in Nevada.

Gov. Hickenlooper’s office denied making the trip on a corporate jet owned by Tesla or co-founder and CEO Elon Musk.

Cooke, the senate’s majority whip and a Greeley Republican, said the trip has “a terrible appearance of impropriety,” largely because Tesla would stand to benefit from the executive order and because Hickenlooper didn’t report the free travel as required by law, according to a copy of the letter obtained by The Denver Post.

“If any government official receives an illegal benefit days before unilaterally changing the law to financially benefit that same corporation, the matter warrants immediate review,” Cooke wrote to Coffman.

Cooke was not specific about when the trip occurred, but wrote that Hickenlooper “communicated to multiple individuals” about traveling on a private jet to Tesla’s facility.

Hickenlooper’s office said the governor has never flown with Elon Musk or to see any facility in Nevada. 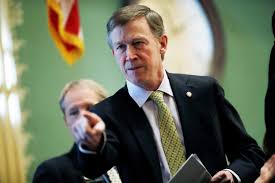 “The allegations in Sen. Cooke’s letter to the attorney general are false,” Hickenlooper’s press secretary, Jacque Montgomery, told The Denver Post in an email. “The governor has never flown on a plane owned by Elon Musk or Tesla. The governor also has never visited a facility in Nevada.”

Coffman’s office did not respond to a Denver Post request for comment, though it normally does not confirm the existence of specific complaints or investigations.

“With or without three months left in office, he simply needs to be held accountable,” Cooke told The Post on Thursday. “If it was me, I’d expect the same, and it has nothing to do with how much time you have left in office. It’s about acting appropriately or not.”

Hickenlooper in June ordered the state to take up low-emission vehicle standards by 2025, and Tesla could likely be one of its biggest beneficiaries.

Cooke’s letter comes almost five weeks after a far-reaching ethics complaint was filed against the governor alleging that he made a habit of crisscrossing the globe on private jets owned by wealthy benefactors, accepted luxury hotel stays and all-expense-paid events, and then did not disclose them as the law requires.

Part of the ethics complaint, which the Colorado Independent Ethics Commission said it will investigate, includes allegations that Hickenlooper has close ties to Musk, who owns multiple aircraft. One of those ties is to Musk’s brother, Kimbal Musk, a Boulder resident whose April wedding Hickenlooper officiated at in Dallas, allegedly after flying there on a Tesla-owned plane from Rocky Mountain Regional Airport, according to the complaint.

The 189-page complaint by newly formed Public Trust Institute — a nonprofit run by former House Speaker Frank McNulty, a Republican — lays out nearly 100 questionable flights Hickenlooper has taken since September 2011, when he first took office, primarily focusing on those taken in the last year.

If Hickenlooper personally paid for the travel and events up front, there’s no need to report them. If he accepted any freebies or even if he reimbursed his hosts after the fact, he must report them, even if they are allowed under Amendment 41 rules. The rules, for example, allow family and close friends to give a public official a gift on special occasions.

Hickenlooper has filed just one gift-disclosure report — in 2017 for a $500 painting given by the first lady of Zambia — since 2013. In that year, he said he had received only T-shirts and hats to the Million Dollar Quartet Musical worth just $90.