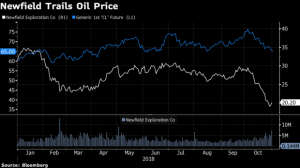 Encana’s $5.5 billion takeover of Newfield Exploration didn’t set well with its investors as news of the purchase on Thursday resulted in an 18 percent plunge in stocks.

Investors apparently worry the Canadian company’s purchase of the firm that has a heavy presence in Oklahoma’s STACK and SCOOP plays will only saddle it with unfamiliar assets. For years, Encana had trimmed its portfolio which included previous oil operations.

“While we see the strategic and financial merits in the acquisition, we suspect it will take some time for the market to digest this transaction and the addition of a new play to the company’s portfolio,” Chris Cox, an analyst at Raymond James & Associates Inc., said in a note according to Bloomberg News.

For Encana, the deal signals a reduced reliance on natural gas and resources in Canada, where pipeline bottlenecks have weighed on prices. Chief Executive Officer Doug Suttles now envisions the Calgary-based company operating in a “headquarterless model,” with major offices in the Houston area and Denver overseeing nearby operations.

Encana pledged significant investor benefits from the takeover, including a 25 percent dividend increase and an expansion of buybacks. It also stressed that the deal adds to its key metric of cash flow per share. In response to a question about the market’s negative reaction, Suttles said he hadn’t even looked at the stock price. Shareholders will realize the benefits of the deal over time, he said during a conference call.

For its part, Newfield soared as much as 14 percent in New York. The shares had been down 36 percent this year through Wednesday.