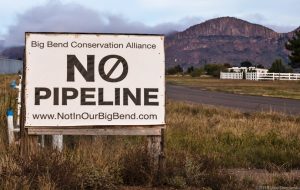 The money’s good but not everyone is excited about the spread of oil and gas exploration in southwest Texas.  Some are angry about the increased traffic at the edge of the Permian Basin where rigs dot the landscape with bright lights at night.

One environmental publication, DeSmog did a recent article on the impact around such cities and towns as Davis and Balmorhea, Texas. The DeSmogBlog was founded in 2006 to fight what it contended are well-funded and highly organized public relations campaigns “poisoning” the climate change debate.

The article was headlined “In Southwest Texas, the Fracking Industry Encroaches on Small Towns, remote Wilderness, and Clear Skies.”

It began this way:  “Sue and James Franklin run a rock and mineral shop in Balmorhea, Texas, a small picturesque town known for hosting the world’s largest spring-fed swimming pool. Their shop is about 15 miles from their home in Verhalen, a place they describe as too tiny to be called a town — only about 10 people live there. The couple never imagined the area, on the southwest edge of the Permian Basin, would become an industrial wasteland, but they say that transformation has begun the last two years.

Texas’ latest oil boom, driven by the fracking industry and crude oil exports, has brought skyrocketing air, noise, and light pollution to small southwest Texas towns and the surrounding lands which are known for majestic mountain views  and brilliant starry night skies. With the oil industry come bright lights illuminating an otherwise almost perfectly dark sky. The Franklins’ home on a narrow rural road is now surrounded by fracking sites. On a clear day they can see 20 of these sites from their 10-acre plot of land.”