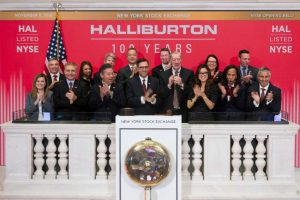 Halliburton, the company that got its start in southern Oklahoma is celebrating its 100th anniversary this week.

Company President and CEO Jeff Miller was joined by Halliburton Executive Chairman Dave Lesar to celebrate the company turning 100 by ringing the Opening Bell on the New York Stock Exchange.

“Reaching our 100th anniversary signifies a milestone few companies will ever achieve and is a testament to the hard work of our employees who deliver on our core values, including integrity, safety, creativity and reliability,” Miller said. “From the humble beginnings of our founder Erle P. Halliburton, Halliburton has innovated, collaborated and executed, through economic and industry cycles, to become a global leader in oilfield services and technology. We look forward to our next century and continuing to deliver superior service to our customers and unparalleled industry returns to our shareholders.” 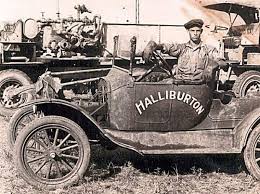 Halliburton will celebrate its 100-year anniversary throughout 2019 with employee, customer and community events.

It was in Duncan, Oklahoma where the company got its start.

Here’s how the company describes its history:

“Founded in 1919, Halliburton is one of the world’s largest providers of products and services to the energy industry. With 60,000 employees, representing 140 nationalities in more than 80 countries, the company helps its customers maximize value throughout the lifecycle of the reservoir – from locating hydrocarbons and managing geological data, to drilling and formation evaluation, well construction and completion, and optimizing production throughout the life of the asset.

Halliburton’s fascinating and proud history reveals a continuous focus on innovation and expansion that began with the company’s founder, Erle P. Halliburton. After borrowing a wagon, a team of mules and a pump, he built a wooden mixing box and started an oil well cementing business in Duncan, Oklahoma.

In the 1930s, Halliburton established its first research laboratories where the company tested cement mixes, began offering acidizing services to break down the resistance of limestone formations and increase the production of oil and gas, and performed its first offshore cementing job using a barge-mounted cementing unit at a rig in the Creole Field in the Gulf of Mexico. This was the beginning of what was to become the world’s most extensive offshore service.

Halliburton took the initial steps toward becoming a worldwide company in 1926. We sold five cementing units to an English company in Burma, the start of our Eastern Hemisphere operations, and Erle P. Halliburton sent his brothers to open our business in Alberta, Canada. We opened in Venezuela in 1940. By 1946, the company – using its innovative technology – had expanded into Colombia, Ecuador, Peru and the Middle East and began performing services for the Arabian-American Oil Company, the forerunner of Saudi Aramco.

In 1984, Halliburton provided all of the well completion equipment for the first multiwell platform offshore China. Two years later, Halliburton became the first American company to perform an oilfield service job on the China mainland

The final decade of the 20th century brought more changes and growth to Halliburton. The company opened a branch office in Moscow in 1991.

The company realigned its work into Eastern and Western Hemisphere operations in 2006, and in 2007, divided its service offerings into two divisions: Completion and Production, and Drilling and Evaluation.