How high will natural gas prices climb this winter? 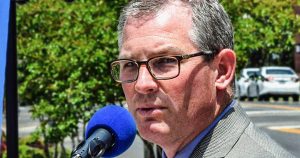 An Environmental Protection Agency official has been arrested and charged with violating Alabama ethics laws.

Trey Glenn is the regional director for the EPA’s southeast region and was indicted and accused of allegedly helping an Alabama law firm fight potential EPA actions to clean up contaminated sites on behalf of Drummond Co., which would be responsible for the cleanups.

He and former Alabama Environmental Management Commissioner Scott Phillips were indicted on soliciting a thing of value from a principal, lobbyist or subordinate and receiving money.

Acting EPA chief Andrew Wheeler has yet to comment but Glenn has responded in a statement provided by his lawyer.

“The charges against me are totally unfounded, and will be vigorously defended,” Glenn said. “I am innocent and expect to be fully vindicated.”

The Alabama Ethics Commission in 2007 also found probable cause that Glenn violated state law to obtain personal trips, including a trip to Disney World that was paid for by a public relations firm representing a client with business before the Alabama Department of Environmental Management, which he was the director of at the time.