Tinker chosen as maintenance center for new B-21 stealth bomber 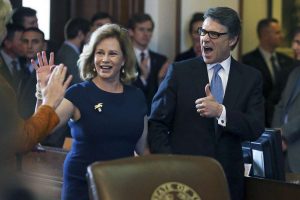 A report in the San Antonio Express-News indicates U.S. Energy Secretary Rick Perry is using campaign funds from four years ago to fly his wife around the world for nuclear talks and attend international energy meetings.

The paper reported that records show Perry’s former gubernatorial campaign fund paid $17,000 to fly Anita Perry to and from London last March for Saudi nuclear meetings. She also attended a panel in South Africa, appearing alongside her husband as they discussed natural gas.

Anita Perry also flew to Paris last year to speak at a women in energy event. Professionally, she is a nurse and the Express-News indicated it’s not clear what role she played at the closed-door talks.

“It’s just not an area where spouses have traditionally been involved,” said University of Minnesota law professor Richard Painter, who served as chief White House ethics lawyer under former President George W. Bush. “We don’t have a first lady to the Treasury Secretary.”

The Department of Energy said Anita Perry doesn’t have a security clearance and hasn’t participated in any meetings requiring one. All her travel is reviewed and cleared by a department ethics official, said agency spokeswoman Shaylyn Hynes.

Rick Perry is one of several Trump cabinet members who have come under fire for racking up expensive bills on chartered jets and first-class flights.

When Anita Perry has accompanied her husband on international trips, the Department of Energy says taxpayers aren’t paying the bill. State campaign finance records show that Texans for Rick Perry — the campaign account that bankrolled the Republican’s runs for governor — has picked up the tab for at least $60,000 worth of her flight costs.

“Mrs. Perry has traveled with Secretary Perry on occasion, adding valuable support to him as he advances DOE’s mission abroad,” Hynes said in a statement. “As these filings confirm, no taxpayer dollars have been spent on Mrs. Perry’s air travel and funding for it is authorized under state and federal laws and regulations. The Department of Energy follows federal travel regulations without exception.”

Anita Perry graduated with a master’s in nursing from UT Health Science Center in San Antonio and has called her career in health care “a great source of pride.”

During 2017, the campaign paid roughly $50,000 to cover her travel to Vienna, Cape Town, Rome and Paris for events including Africa Oil Week, a G7 meeting and an International Atomic Energy Agency conference, records show.

Anita Perry traveled to Rome in April 2017 for a G7 energy ministers meeting as part of the official U.S. delegation. There, she spoke at a side event called “Africa 2030: Empowering the continent through innovation, green tech solutions and capacity building,” according to Politico.

In Paris last year, Anita Perry delivered a speech at a Women in Clean Energy event, where she was listed on the program as the former first lady of Texas and a “health, women and economic development advocate.”

Anita Perry flew to Cape Town in October 2017 as part of the department’s official delegation to Africa Oil Week, according to trade publication E&E News. Rick Perry’s campaign account reimbursed the U.S. Department of Energy for the cost of her flights, campaign finance reports said.