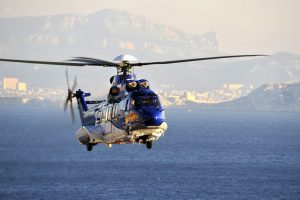 Bankruptcy for a helicopter-leasing business that serves offshore oil drillers around the globe. Waypoint Leasing Holdings Ltd. has flown itself into bankruptcy court and at the same time, put itself on the auction block.

Waypoint is the business backed by Michael Dell and George Soros and filed for bankruptcy on Sunday. It has focused on serving offshore oil drillers.

Hooman Yazhari, Waypoint’s chief executive, said the bankruptcy is “the next step” in the company’s bid to restructure its balance sheet. Waypoint has been in talks with lenders for months and after putting itself up for sale has received bids from “numerous parties,” according to a statement.

The company, which will continue operating during the chapter 11 case, says it expects to emerge from bankruptcy protection under new ownership.