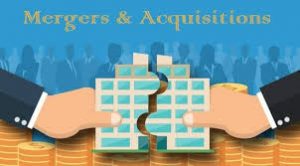 If  some of the energy  experts are right, Chesapeake Energy’s recent $3 billion purchase of WildHorse Resource Development in Texas isn’t the last of the acquisitions of big shale players. And don’t forget Canada’s Encana Corp. buying Newfield Exploration Co. for $55 billion earlier this month.

They expect many more to follow in the coming year.

The Houston energy investment banking firm Tudor, Pickering, Holt & Co. said that’s just the “tip of the M&A iceberg.” Expect more to come in 2019 according to a recent report in the Midland Reporter-Telegram.

“Buckle up as the upstream merger train has left the station, and next year will likely be a wild ride,” the firm said while unleashing a torrent of clichés.

The last few years saw a land rush in West Texas’ Permian Basin in what’s become the world’s hottest oil play. This spring saw Permian holdings begin to consolidate under bigger players after nearly all of the top acreage was scooped up. Now, it appears the merger spree is spreading to onshore shale nationwide.

Penn Virginia is an Eagle Ford company. WildHorse is focused on the emerging northeastern portion of the Eagle Ford west of College Station. Newfield, of The Woodlands, has a mix of assets, but it’s primary focus is in Oklahoma.

“Early this year it was predominantly a Permian play,” said Neal Dingmann, an energy analyst with SunTrust Robinson Humphrey, “and now it seems to be expanded to all of North America.”

Dingmann said he expects more corporate combinations in other regions such as North Dakota’s Bakken shale, but dealmakers will still focus on the Permian. It’s just that the Permian won’t hog all of the fun.

It’s consumed a lot of 2018. In a pair of $8 billion Permian-focused deals earlier this year, two Midland companies, Concho Resources and Diamondback Energy acquired, respectively, RSP Permian and Energen. The largest deal of the year still belongs to British energy giant BP buying up the Texas shale assets — including both the Permian and Eagle Ford — of BHP Billiton for $10.5 billion. The sale closed at the end of October.

The next big Permian deal could come from the privately owned Midland company Endeavor Energy, which is looking to sell itself for close to $10 billion, as first reported by The Wall Street Journal.

The U.S. shale industry is now more than a decade old since pioneers combined horizontal drilling techniques with hydraulic fracturing, called fracking, to access and crack the shale rock and its large volumes of oil and gas. There are still more prospective areas such as Wyoming’s Powder River Basin, the extension of the Austin Chalk shale into Louisiana and others, but much of the shale sector is maturing.

Even though shareholders are pushing companies to keep their spending levels conservative after the recent oil bust, analysts still see the industry moving toward an acquire-or-be-acquired mentality.

Concho, for instance, is simultaneously running almost 35 drilling rigs just in the Permian. A lot of other companies can barely afford to operate one or two at a time. And Concho can’t even come close to the buying power of behemoths like Exxon Mobil and Chevron as they continue to expand in the Permian.

“How do you compete with that?” Dingmann said.