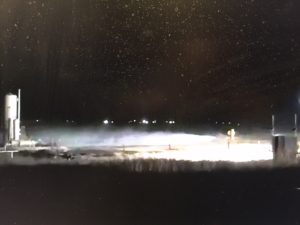 A well spewing natural gas and condensate caused a Tuesday night concern near the western Oklahoma town of Hammon.

Roger Mills County Sheriff Darren Atha indicated in a Facebook posting that the well, on the Combined Resources Corp. ARCHER No 3-5H location was about two miles from the town. That puts it in the area of Eastern Roger Mills County and western Custer County.

No injuries were reported and crews did not attempt to repair the valve until Wednesday morning.