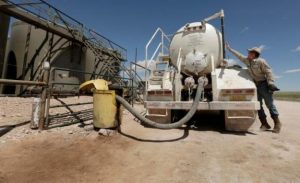 With the issue of earthquakes caused by increased wastewater well activity in northern Oklahoma and concern that the geology in West Texas is reaching capacity, the Environmental Protection Agency is considering a drastic move.

Should it make changes to federal clean water regulations to allow oil and gas drillers to release wastewater directly into rivers and streams?  Even those from where cities and towns get their water supplies?

The EPA has been discussing the idea with experts and also holding public meetings around the country. It hopes to have a decision in a year.

“We’re very much in a listening mode now,” said Lee Forsgren, deputy assistant administrator at EPA’s Office of Water in Washington in an interview with the Houston Chronicle.

As the paper pointed out, the biggest question surrounding the issue is whether the water standards can be adjusted so oil and gas companies can treat wastewater and release it into streams and rivers, without contaminating drinking supplies and killing local wildlife.

“Technology is changing. At some point, if your disposal options are limited or it becomes so expensive you’re having to truck water to be disposed of several hundred miles away, companies will do it,” said Jared Craighead, legal counsel to Texas Railroad Commissioner Ryan Sitton. “It might not make sense today but maybe in a year or two.”

Technically speaking, drillers are allowed to do this in limited circumstances under federal law, but the process of cleaning salt-, heavy metal- and chemical-laden wastewater to the point it would meet state or federal water standards is so costly that it’s rarely done, experts say.

In Washington, lobbyists for the oil and wastewater industries are pushing hard to loosen regulations they say go too far. Their primary case to the EPA is that the treated wastewater could provide a valuable resource for drought-ravaged water supplies in the western United States, with potential uses for agriculture and industry, and even drinking water supplies.

“It’s an opportunity that could have some really good benefits, particularly in areas that need water,” said Lee Fuller, executive vice president of the Independent Petroleum Association of America. “At this point all that water is just going back in the ground.”