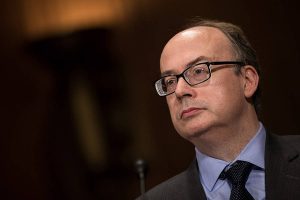 Democrats called him the wrong man for the job, but when Jeffrey Clark was confirmed recently to be the nation’s top environmental lawyer, he had the support of Oklahoma’s two U.S. Senators.

Sens. Jim Inhofe and James Lankford helped confirm Clark on a 52-45 vote to a key position in President Trump’s move to roll back energy regulations.

Environmentalists and Democrats don’t like Clark because he represented BP in lawsuits over the nation’s largest oil spill and also repeatedly challenged the science of climate change. He will serve as assistant attorney general for environment and natural resources and in the job, will handle the federal government’s defense of legal challenges to the Trump administration’s environmental efforts.

Clark will also be the man responsible for taking polluters to court as head of the Justice Department’s Environment and Natural Resources Division.

Democrats opposed his nomination because during his time in the Washington, D.C. office of the law firm of Kirkland and Ellis, he represented several oil industry clients including BP over the 2010 Deepwater Horizon disaster in the Gulf of Mexico.

Clark also represented the U.S. Chamber of Commerce in lawsuits challenging the federal government’s authority to regulate carbon emissions. In court, he repeatedly argued that it is inappropriate to base government policymaking on the scientific consensus presented by the UN’s Intergovernmental Panel on Climate Change (IPCC).

“When did America risk coming to be ruled by foreign scientists and apparatchiks at the United Nations?” Clark demanded in a 2010 blog post on the EPA’s endangerment finding. In a 2010 talk at a convention of the conservative Federalist Society, he said the Obama administration’s policies to reduce greenhouse gas emissions were “reminiscent of kind of a Leninistic program from the 1920s to seize control of the commanding heights of the economy.”

In 2016, he filed a “friend of the court” brief against the Clean Power Plan, the nation’s first limits on carbon emissions from power plants, on behalf of a non-profit group that opposes regulation, Consumers’ Research. Environmental groups could use that as a basis to seek Clark’s recusal in the inevitable litigation ahead over the Trump administration’s Clean Power Plan repeal.

Critics of Clark pointed out that the Senate was confirming someone who had called the science of climate change “contestable” during a week when a Category 4 hurricane hit the Southeast and the IPCC warned that time is running out to head off catastrophic warming.

Clark is “exactly the wrong person to be in this job of enforcing regulations to clean up our environment,” said Sen. Dick Durbin (D-Ill.) the minority whip.

But Senate Majority Leader Mitch McConnell (R-Ky.) praised Clark for his background as a litigator. “Mr. Clark’s legal colleagues describe him as one of the most capable lawyers with whom they’ve ever worked,” he said.