Environmental activist vows to bring ‘revolution’ to the corporation commission 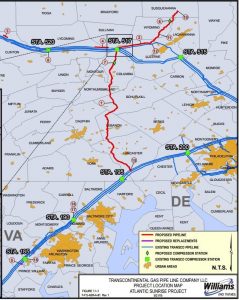 Williams  reported that the Atlantic Sunrise pipeline project has achieved mechanical completion and 1.7 Bcf/d of critically needed capacity is now ready to be placed in service pending final approval from the Federal Energy Regulatory Commission (FERC). The company requested such permission from the FERC earlier today.

Backed by long-term shipper commitments, the nearly $3 billion expansion of the existing Transco natural gas pipeline will connect abundant Marcellus gas supplies with markets in the Mid-Atlantic, including the Cove Point LNG facility, and the Southeastern U.S. and is designed to increase natural gas deliveries by 1.7 billion cubic feet per day.

FERC initially authorized the project in February 2017, concluding that environmental impacts associated with the project would be reduced to “less than significant levels” with the implementation of mitigation measures proposed by the company and FERC.