Corporation Commission to consider changes to oil and gas rules 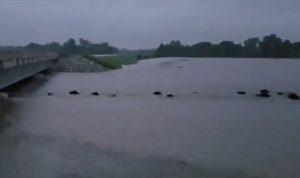 (cattle swept away in floods)

Historic flooding occurred throughout South Central Oklahoma on Friday, September 21st, 2018. The Oklahoma Conservation Commission (OCC) and USDA-Natural Resources Conservation Service (USDA-NRCS) would like to extend our sincere sorrow to those affected by the floods.

“These floods were devastating,” said OCC Executive Director Trey Lam. “The full extent of the damage to the land and the loss of property and livestock will not be fully known for some time. However, due to OCC’s partnership with USDA-NRCS and the funding we received from the State of Oklahoma, we know the losses are not as catastrophic as they could have been thanks to our upstream flood control dams.” 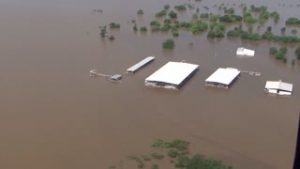 With numerous areas in South Central Oklahoma receiving from 10 to 17 inches of rainfall on September 21st, USDA-NRCS estimates the small watershed flood control dams saved the state $19.6 million in damages. These are damages that would have occurred had the dams not been constructed. The hardest hit counties were Pontotoc County and Coal County where several flood control dams experienced a greater than 1,000 year flooding event.

“As a rancher, business owner, and resident of Pontotoc County I saw the devastation caused by the flooding,” said OCC Area V Commissioner Bill Clark. “I also know that without the upstream flood control dams and the partnership between OCC and USDA-NRCS to maintain those structures, the damage could have been much worse. These structures not only help protect lives and property but they help protect the soils. If a fence gets washed away that can be replaced fairly quickly. If our soil erodes and washes away that could take decades to replace. I am thankful Oklahoma House Speaker Charles McCall was able to visit with me and tour some of the flooded sites so he could get a first-hand look of how these flood control dams can mitigate some of the potential damage.” 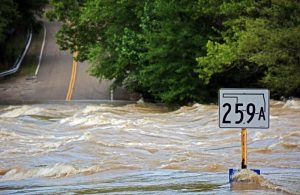 “Upstream flood control continues to be a priority for Oklahoma,” said McCall, R-Atoka. “Last session, the Legislature appropriated the maximum amount toward federal matching dollars for rehabilitation of flood control facilities in Oklahoma. The weather events of last week are confirmation that upstream flood control needs to remain a priority for Oklahoma and that dollars invested toward this mission will result in a significant return on investment into the distant future. We will continue to work with our federal delegation to ensure these vital infrastructures are protected.”

Oklahoma has the most upstream flood control dams in the United States with 2,107 dams, the first of which was completed in 1948. Since more than half of these dams have exceeded their design lives, rehabilitation needs to occur on several upstream flood control dams throughout Oklahoma. Many of the dams are in different settings than they were when originally constructed and need to be rehabilitated to meet the current safety requirements.

“We are pleased to report that the upstream flood control dams functioned as designed,” said USDA-NRCS State Conservationist Gary O’Neill. “The dams did their job by protecting lives and reducing downstream damages. The flooding was so severe that the $19.6 million in estimated savings equates to nearly 20 percent of the average annual benefits from Oklahoma’s upstream flood control dams.”

While OCC and USDA-NRCS are pleased that the flood control dams performed as they were intended, both agencies recognize the need for additional funding to maintain and repair existing dams and build new ones. O’Neill also said that USDA-NRCS currently has 330 proposed structures that have been planned and authorized but have not been constructed due to a lack of federal funding, “If federal  funds had been available and we had those dams in place, the State could have realized another $7.5 million in benefits from this storm alone.” Lam said, “This past session we saw a real commitment from the State Legislature to provide funding for repair and rehabilitation of our flood control dams. I hope to see even greater appropriations next year so the Oklahoma Conservation Commission, with help from their federal partners at USDA-NRCS can better protect Oklahomans during flooding events.