Rig counts climb in Oklahoma and the U.S. 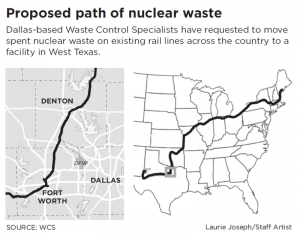 A proposal by a Dallas company to store high-level radioactive waste in a West Texas dump means the used nuclear fuel would most likely be carried through Oklahoma.

Waste Control Specialists and Orano USA created a joint venture known as Interim Storage Partners and are seeking a permit from the Nuclear Regulatory Commission to store the radioactive waste at the Andrews County facility. The permit is pending and would need the approval of federal regulators, according to a report by the Dallas Morning News.

The waste would be carried from nuclear power plants across the country and the route would also take it through downtown Fort Worth.

But environmentalists are opposed to the route and believe once the waste is stored in Andrews County it will never leave. The opponents also contend the Union Pacific rail line running through downtown Dallas would be the most straightforward way to move the fuel.

“The shipments would take over 20 years to move across the country and come to Texas,” said Karen Hadden, executive director of the Austin-based Sustainable Energy & Economic Development (SEED) Coalition, referring to the nuclear waste currently stored in different parts of the country. “And we’re afraid that once it got here, it would never leave.”

The proposed route publicized this week shows nuclear waste from the Maine Yankee nuclear power plant, which closed more than 20 years ago, going through the Midwest, through Oklahoma and down to Fort Worth and then west to Andrews County.

The Dallas County Commissioners Court in April adopted a resolution opposing the transportation of nuclear waste through the region. Similar resolutions have been approved  by San Antonio and Bexar and Nueces counties.

At a Thursday news conference, adjacent to a rail line in downtown Dallas, the chief of staff for Dallas County Commissioner Theresa Daniel read a statement saying: “Our lives, land and aquifers must be protected from radioactive contamination which could result from accidents, radiation releases or leaks, or potential terrorist actions.”

Interim Storage Partners documents acknowledge that some routes might have risks that could exceed the tolerances — such as higher falls. In those cases, a different route is chosen.

This effort to find a temporary storage site started in 2015 and is expected to continue for several years. Waste Control Specialists’ 14,900-acre facility near the Texas-New Mexico border is already permitted to store low-level radioactive waste.