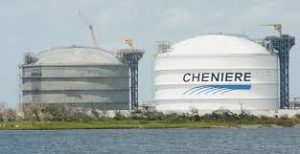 Cheniere Energy is the firm building a$1 billion Midship pipeline to carry natural gas from Kingfisher south to the state line.