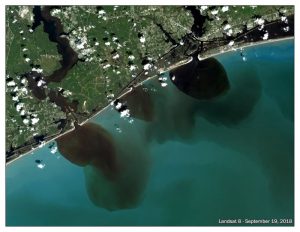 Here’s how the News and Observer newspaper based in Raleigh, North Carolina reported the story.

A NASA satellite is tracking flooding in the Carolinas following Hurricane Florence, and its images show dark, polluted water flowing from rivers into the Atlantic Ocean.

Nearly 8 trillion gallons of rain fell across North Carolina during the storm, according to the National Weather Service in Raleigh’s estimate. 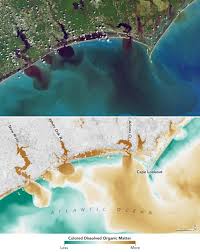 That rain led to catastrophic flooding across the state, and has polluted rivers, streams creeks and their outflows along the coast, NASA’s satellite images show.