Oklahoma and national rig counts slipped in past week 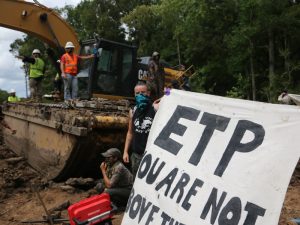 Like Oklahoma, the state of Louisiana joined the growing effort to crack down on pipeline and energy protesters.  Louisiana’s law went into effect in August and already it faces a challenge following the recent felony arrests of environmental protesters at the site of the Bayou Bridge Pipeline which is the last leg of the Dakota Access line.

Once completed, the line will bring crude oil from the Bakken oil fields of North Dakota through Louisiana to be exported. But protesters recently attempted to halt construction. They confronted police and some ended up being arrested.

Now the pipeline opponents vow a legal challenge to Louisiana’s new law. The law was the result of efforts by Louisiana state Rep. Major Thibaut.

“You know that there’s a right way to do things and a wrong way,” he told a legislative committee. “And if you want to protest against something…get your permit and you go do it in a legal fashion.”

Louisiana’s law is similar to the one in Oklahoma. It deems oil and gas pipelines to be “critical infrastructure,” which includes nuclear plants, oil refineries and water treatment facilities. As of Aug. 1, trespassing near the pipelines in Louisiana is a felony offense with a possible sentence of up to five years in prison.

The statute Oklahoma Gov. Mary Fallin approved in May 2017 makes trespassing a felony with a minimum $10,000 fine for impeding operations of a facility. And if a trespasser “tampers” with the infrastructure, they could face a $100,000 fine or 10 years of imprisonment.

But Oklahoma’s law also says if any organization is found to be a conspirator with the trespasser, it could be fined as much as $1 million in cases involving damage.

Read more on NPR report of the Louisiana law.