Governor Mary Fallin and Valkyrie Systems Aerospace (VSA)  announced Tuesday a partnership between the state of Oklahoma and the company. The partnership will ultimately accommodate manufacturing facilities, as well as flight operations and training in the greater Oklahoma City area.

VSA was recently awarded a 21st Century Quality Jobs Program incentive contract that will create at least 352 new high-paying jobs for the state of Oklahoma within the next five years.

“Oklahoma is one of the world’s premier destinations for the aerospace and defense industry. The new Valkyrie facility will continue to elevate this industry in our state,” said Fallin. “By bringing aircraft manufacturing to Oklahoma, the company will help us grow as a leader in aerospace and UAS (unmanned aircraft systems). Our talented workforce and low cost of doing business along with a good quality of life makes Oklahoma very attractive for growing companies like Valkyrie. This is another example that our economic pro-business policies are diversifying Oklahoma’s economy.”

“We appreciate the efforts of Governor Mary Fallin and her team,” Glenn Dawson, Valkyrie Systems Aerospace chief executive officer, said. “They have worked hard to create an environment to attract some of the most exciting companies in the aerospace industry today. Oklahoma already has some of the top aviation companies in the world, and they are starting to grow the unmanned arena as well. The state of Oklahoma is well on its way to become the leader in unmanned aerospace development and manufacturing. We are proud to announce our choice of Oklahoma City for VSA’s operations center set to open during 2018’s fourth quarter.”

“One of the reasons VSA chose to partner with the state of Oklahoma was the ability to integrate our company with the University of Oklahoma’s aviation and aerospace engineering program, as well as Oklahoma State University’s autonomous UAV (unmanned aerial vehicles) program,” said Steve Tafoya, managing partner of VSA. “We are proud to bring high-tech jobs to the greater Oklahoma City area. Valkyrie’s goal is to create and maintain partnerships with the higher education system in Oklahoma, all the while developing and retaining students with the goal of moving them into the aerospace workforce as supported by Valkyrie Systems Aerospace.”

“The Oklahoma Department of Commerce has worked with Valkyrie for nine months to bring this project to fruition,” Oklahoma Secretary of Commerce and Tourism Deby Snodgrass said.  “By locating in Oklahoma City, they will be in close proximity to other world-class companies and defense operations and near our research universities, which will provide a pipeline of talent through numerous aerospace and UAS degree programs.” 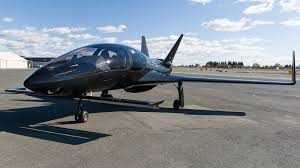 The HoverJets’ unique heavy-lift vertical takeoff and landing allow them to operate in any environment, whether it be land, sea or air.

More information on VSA may be obtained by going here,