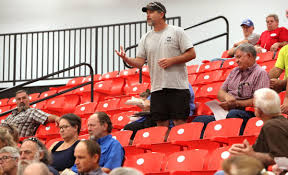 Northeast Oklahomans are putting up a growing fight in an effort to stop pollution caused by additional chicken farms popping up in the area.

As the Tulsa World recently reported, another meeting was held last weekend by angry residents of Delaware County.  It was the latest gathering of those upset over a poultry operation near Oaks was built near the headquarters of Spring Creek.  It has also become more of a regional effort involving others in adjacent counties who have concerns about smell, air quality and possible pollution of water.

Cherokee Nation Secretary of Environment Sara Hill explained new information will be available on the tribe’s website with maps of new chicken house locations under construction and links to agencies and government entities involved.

Cherokee Nation Council members assured the crowd that poultry would be high on their agenda with meetings this week.

Missing from the lineup was Simmons Foods, the company involved in most of the new private operations aimed at supplying an upgraded processing facility soon to be built near Gentry, Arkansas.

Pam Fisher, organizer of the Spring Creek Guardians, said an invitation was sent to Simmons, but on Monday Simmons spokesman Donny Epp said he was not aware of one. The Guardians are a Facebook group that is organizing the meetings on the chicken house issue.

Oklahoma Conservation Commission Blue Thumb Program Director Jean Lemmon explained the operations of that volunteer effort and told people where and how they could learn to monitor water quality in their local watersheds.

State Sen. Wayne Shaw, R-Grove, was the only state politician in the lineup. Audible objection met his qualified support for those in the room by noting he represented all residents of his district.

Ed Fite, vice president of water quality for Grand River Dam Authority, said his agency is monitoring the progress of the movement.

In 1997, Fite was one of 15 people who served on a task force set by then Gov. Frank Keating. That effort led to creation of current statewide regulations over swine and poultry operations.

That sort of effort may again be required, he said.

“Either people will get really upset and continue to get upset or this will lead to something like what I’m suggesting where people sit down and work out something to get us through the next 20 or 30 years,” he said.