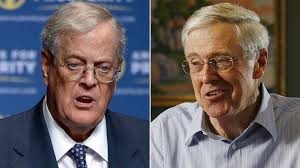 The billionaire Koch brothers say they’re going to use their energy money to support eight House Republicans in tight races across the country.

Since none of those tight races is believed to be in Oklahoma, no U.S. Representatives in the state will be getting their money. In announcing the support, the political network created by the Koch brothers, who got their money through their Wichita, Kansas based operations, pledged money and activists to help re-elect the Representatives.

The candidates backed by the network’s political arm, Americans for Prosperity, include eight men from seven states: Reps. Rod Blum and David Young of Iowa, Dave Brat of Virginia, Ted Budd of North Carolina, Steve Chabot of Ohio, Will Hurd of Texas, Erik Paulsen of Minnesota and Peter Roskam of Illinois. Brat, Roskam and Hurd in particular are facing serious challenges in November, and are vulnerable to being defeated by their Democratic opponents.