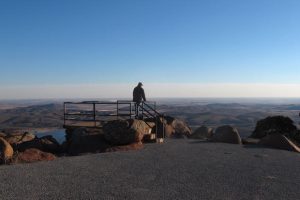 Efforts of the EPA to override an Obama-era plan to curb haze-forming sulfur dioxide emissions from coal-fired power plants in Texas could end up affecting the Wichita Mountains Wildlife Refuge near Lawton, Oklahoma.

That’s because the Texas haze plan was meant in part to curb the haze that made its way north into southern Oklahoma. The refuge was specifically mentioned as part of the rule.

But Region 6 EPA Administrator Anne Idsal last week approved a draft rule that would create an in-state emissions trading program in Texas.  A Sept. 26 public hearing has been set to be held at the state capital in Austin.

The new rule would apply to more than a dozen plants in Texas and take effect by January 2019. Some see the new EPA effort as a retreat by the Trump administration in its fight over how to pursue the goals of the regional haze reduction program. The program’s goal is to restore natural visibility to 156 national parks and wilderness areas by 2064.

In January of 2017, the Obama administration wanted to require nine of the coal-fired plants in Texas to install new or upgraded scrubbers. But the Trump administration last fall substituted the emissions trading plan in the final rule, a move that angered the National Parks Conservation Association and other environmental groups. They complained the Trump plan amounted to nothing more than a “bait and switch” that violated the Clean Air Act requirements for public notice and comment.

Among the provisions on which EPA is now seeking comment is whether it made the right decision in replacing the Obama-era plan with the intrastate emissions trading program. The agency’s own view is that the new approach would lead to pollution reductions “consistent with visibility transport requirements and is part of the long-term strategy” for meeting the regional haze program’s “reasonable progress” targets, according to the proposed rule.