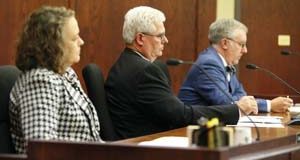 Kansas energy regulators are being accused of continuing to allow oil and gas drillers to file applications for wastewater injection well permits and not giving the public adequate notice. It’s the claim of the Kansas Sierra Club and others who blame the wastewater wells for causing earthquakes in the Flint Hills of Kansas.

The latest claim came from Lawrence, Kansas attorney Robert Eye who represented the Kansas Sierra Club, Douglas County and five individuals before the Kansas Corporation Commission according to the Lawrence Journal World.

Eye contended the KCC has not been enforcing the legal public notice requirements for the past decade. He also claimed the KCC issued more than 2,000 permits for the wells in Kansas dating back to 2008 and gave the public only 15 days to file protests instead of the 30 days required by federal law.

“The remedy that we’ve asked for in that investigation docket is to have all the permits that were issued on a defective published notice to be revoked and to have the holders of those permits reapply under a proper notice,” Eye said in a recent interview.

Underground injection wells around oil and gas fields have been linked to earthquakes in south-central Kansas that many people say have caused significant property damage. Some have also argued that in certain cases they can pose a threat to underground drinking water supplies.

“The significance is they are choking us off in terms of giving us less and less time to try to mount a protest, to submit any kind of comment, and that’s a lot,” Cindy Hoedel, a Matfield Green resident who has complained about earthquakes in her area, said in an interview after the KCC meeting. “These notices get published in these tiny little newspapers, and sometimes it might take us 15 days before we find it, before somebody notices it.”