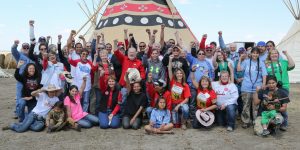 The U.S. Department of State recently published its Draft Environmental Assessment for the Keystone XL Pipeline Mainline Alternative Route in Nebraska and at least one coalition has expressed vehement opposition to the proposal.

The coalition asserts the plan minimizes the impact of the Keystone XL pipeline by stating it “would produce only minor impacts to the land, water, endangered species and Native American sacred sites in Nebraska like the Ponca Trail of Tears.”

The group alleges a due process violation occurred for the directly affected landowners on the Mainline Alternative route, many of whom were not aware until late 2017 that the pipeline might be plowing through their farms or coming as close as 100 feet from their homes and private wells. Bold Nebraska says there will be no additional public hearings to address this critical issue.

“We’re outraged at this violation of due process — and Bold, along with Tribal Nations and other environmental groups, continue to challenge the Trump Administration’s rubber-stamp approval of a federal permit for KXL in court,” stated Mark Hefflinger, in a press release issued on Tuesday by Bold Nebraska.

The group says the Environmental Assessment states that while “cultural resources” reviews remain ongoing, the Mainline Alternative route, which would cross the historic Ponca Trail of Tears, and come within 25 miles of the grave of Standing Bear, would have only “minor” impacts on these sacred sites.

Bold Nebraska calls out the government and Environmental Assessment by alleging it utilized shortcuts rather than a more thorough review of significant issues including:

The 304-page Draft Environmental Assessment can be viewed here.