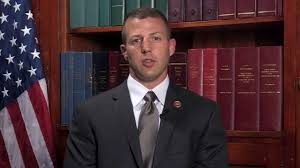 In a weekly release, he wrote of a White House event:

“This week at the White House, President Trump held the second annual ‘Made in America’ showcase.  Representing Oklahoma at the showcase was Round House Jeans, a company who’s been making jeans in Shawnee, Oklahoma for the last 110 years.  But that’s just one of many companies that could have been in attendance to tout their Made in the USA label.  Oklahoma also has Nonni’s Foods of Tulsa, Griffin Foods of Muskogee, Shawnee Milling Company, Ditch Witch of Perry, Braum’s of Tuttle, Stilwell Foods, and so many more.

I understand that it isn’t always easy to translate the big picture of national news into how it affects our backyard on a day-to-day basis.  I’ll tell you firsthand that one of President Trump’s major policies is working in Oklahoma’s favor: lower taxes across the board.

Last December, President Trump signed into law the Tax Cuts and Jobs Act which passed with only the votes of Republicans in the House and Senate.  Since then, 1.3 million jobs have been created.  642 companies and counting have given out pay raises, bonuses, or more benefits to workers.  There were over 6.6 million job openings as of May 2018, meaning we have more job openings than workers to fill them.  There were 5.75 million new hires in May 2018, which is the highest level in 17 years and the second highest on record.

Oklahoma companies employ thousands and their impact is significant.  Since tax reform, multiple companies with an Oklahoma presence have given their employees raises, increased benefits, or bonuses this year including Walmart, Lowes, Ryder, and Comcast.  Oklahoma’s June unemployment rate matches the national unemployment rate from April at a historically low 3.9%.  Lowering the corporate tax rate allowed Oklahoma based-companies the flexibility to invest in their employees and grow their operations.

As a small business owner, I understand firsthand that small businesses are the backbone of our economy.  In rural communities like ours, this is especially true.  President Trump is a ‘jobs’ president.  Together, our policies have turned around the United States’ economy and our workforce.  There’s no doubt about it – our country and its citizens are better off now.  President Trump’s work to keep companies inside the United States will continue the winning streak for Oklahomans.”