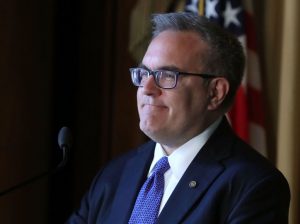 The man who succeeded Scott Pruitt as administrator of the Environmental Protection Agency, Andrew Wheeler, delivered his first address to employees and the media on Wednesday.

At he quickly went off script and addressed his prior work with the coal industry.

Wheeler explained his grandfather had been a coal miner in the Great Depression.

“I get frustrated with the media when they report I was a coal lobbyist,” said Wheeler, who worked as coal lobbyist for Murray Energy Corp, the largest coal mining company in the United States. During his time as a lobbyist, Wheeler argued, he fought for coal miner pensions and sought to protect workers.

Wheeler, who was brought onto the agency by Pruitt before his resignation last week laid out his priorities for the EPA. He wants to speed up the process by which permits are approved or denied. He also wants to visit all EPA regional office as soon as possible. He emphasized several times a commitment to “risk communication” improvement but never referenced climate change in his speech.

His defense of the coal industry drew criticism from environmental groups.

“No one should forget that Wheeler is a coal lobbyist dogged by ethical issues who is now doing things at the EPA that corporate polluters once paid him to ask Scott Pruitt to do,” said Sierra Club Resist campaign director Maura Cowley in a statement released shortly after Wheeler’s address. “Wheeler looks a lot like Pruitt 2.0, and no one should have confidence that he will do what is necessary to keep our families safe from the corporate polluters who signed his paychecks just months ago.”