Pruitt’s ethical scandals force him to resign as EPA Administrator 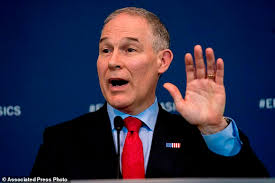 When he was head of the Environmental Protection Agency, Scott Pruitt also carried the title of “former Oklahoma Attorney General.” Now he is the “former” EPA Administrator.

The 50-year old Pruitt resigned  Thursday with the resignation to be effective Friday, July 6. He sent a letter to President Trump, thanking him for the opportunity to serve him.

“It is extremely difficult for me to cease serving you in this role first because I count it a blessing to be serving you in any capacity, but also, because of the transformative work that is occurring. However, the unrelenting attacks on me personally, my family, are unprecedented and have taken a sizable toll on all of us,” wrote Pruitt.

He concluded, “My desire in service to you has always been to bless you as you make important decisions for the American people. I believe you are serving as President today because of God’s providence. I believe that same providence brought me into your service. I pray as I have served you that I have blessed you and enabled you to effectively lead the American people. Thank you again Mr. President for the honor of serving you and I wish you Godspeed in all that you put your hand to.” 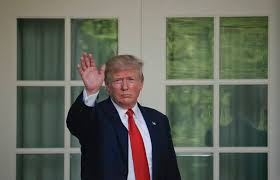 His resignation was publicly revealed by President Trump in a twitter announcement.

“I have accepted the resignation of Scott Pruitt as the Administrator “Within the Agency Scott has done an outstanding job, and I will always be thankful to him for this.”

While flying to Montana on Thursday, the President still voiced support for Pruitt saying he was not bothered by the allegations against the EPA chief. But he explained he accepted the resignation because the allegations had become a distraction.

“There was no final straw. Scott is a terrific guy. He came to me and he said, ‘Look, I have such great confidence in the administration. I don’t want to be a distraction.”

The President added that Pruitt had approached him “a couple of days” before the resignation and the decision was “very much up to” Pruitt.

“He’ll go on to great things. He’s going to have a wonderful life, I hope,” said President Trump.

Pruitt will be replaced by Senate-confirmed deputy Andrew Wheeler, a former energy lobbyists. He will take over the duties of acting administrator of the EPA on Monday and the President expressed confidence in him.

“I have no doubt that Andy will continue on with our great and lasting EPA agenda. We have made tremendous progress and the future of the EPA is very bright,” commented the President.

Environmentalists hailed the resignation while conservatives were not happy about Pruitt’s departure. In the past year, he had come under at least 13 federal investigations of his alleged ethical lapses involving rental of an apartment from a lobbyist, the use of aides to run personal errands for him, the seeking of a job for his wife, and his travel expenses and penchant for traveling first class rather than commercial.