Panhandle got the rain it wanted—-now the sultry weather arrives 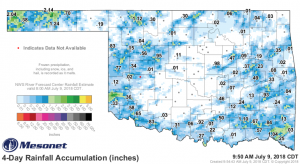 While the Oklahoma Panhandle finally received some substantial rainfall in recent days, the hot days of summer are still with us. And they promise to bear down on us later in the week with temperatures in the upper 90s and maybe the low 100s grilling the state.

“Two inches in Cimarron County…that hits the spot! Other than that brief flirtation with some rain, it’s another steady march into triple-digit territory through the week,” he cautioned in a Mesonet update.

As he wrote this week, “Ahhhh, July, when we become the heat dome’s fool. As it meanders to the east and west, those on the periphery of said torture dome get a chance of showers and storms. The summer variety of storms, mind you…dump a ton of rain, then *POOF*!”

In other words, the heat dome is building and as McManus put it, “we’re left holding a bag full of sultry.”