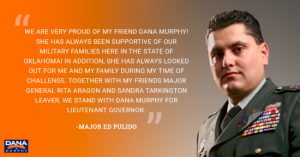 As Oklahoma Corporation Commissioner Dana Murphy makes her bid in a runoff for the GOP Lieutenant Governor nomination, she’s announced what she calls major endorsements.

One is from Major Ed Pulido, a wounded Iraq war veteran from Oklahoma City.

“We are very proud of my friend Dana Murphy!” wrote Pulido. “But she has always been supportive of our military families here in the state of Oklahoma.”

“She has always looked out for me and my family during my time of challenge. Together with my friends Major General Rita Aragon and Sandra Tarkington Leaver, we stand with Dana Murphy for Lieutenant Governor,” he added.

General Rita Aragon was the other endorsement.

The runoff election against Matt Pinnell will be held in less than 50 days.