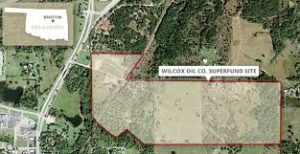 Residents of Bristow received an EPA and Oklahoma Department of Environmental Quality update this week on the cleanup of the former Lorraine and Wilcox oil refinery.

Tank sludge, lead and other chemicals have been seeping into the ground of the nearly 140 acre site and  both agencies offered proposed cleanup solutions during a Tuesday night meeting.

“What we’re proposing is to clean up nine areas where there’s waste material left behind from the refinery,” said Amy Brittain, DEQ’s Environment Programs Manager in an interview with Tulsa’s News on 6.

This cleanup is considered limited action, so the entire site would not be cleaned up during this first process.  The EPA is testing and has already cleaned up some oil waste.

“This is our first step towards cleaning up the site, so any cleanup will leave the property better than it was,” said Brittain, “but we’re kind of with them, we want to see the full property cleaned up.”

The EPA would like to start the process next year, but right now there’s no definite starting date as the agencies consider ways to clean up.

“We’re looking at areas where people live and then some small, really contaminated area within the oil process area,” explained Brittain.

The total cost for the latter two plans would be a little more than $4 million.

Residents say they’re hopeful but still unsure about the future.

“I think they left a lot of questions unanswered and so time will tell,” said area resident Jeff Sargent.

In the meantime, they hope their concerns are addressed and the cleanup starts soon.

Both the EPA and the DEQ are accepting public comment.