OIPA names David Le Norman as Member of the Year 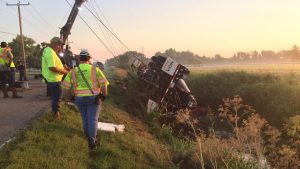 Police in Yukon, Oklahoma indicate the frac sand truck driver killed in a crash last week was talking on her cellphone at the time of the July 5th incident.

Paula Jo Black of Sulphur Springs, Texas was killed when the Tex-Sand Inc.  truck crashed into a ditch off State Highway 4 just north of Yukon near the North Canadian River. Police say the trailer was loaded with more than 45,000 pounds of frack sand and the truck started to drift off the roadway.

The 50-year old driver couldn’t correct in time and the rig overturned in the ditch. Investigators later determined she had been on the cellphone with Tex-Sand at the time and told company officials there was a problem with the truck.

The Yukon  Review reported that Black was talking with someone at the company when she interrupted by saying, Whoa, whoa, whoa, whoa” then there was the sound of a loud crash.

Still to possibly be determined if whether the driver was inattentive because of the cell phone conversation or whether a mechanical issue with the truck caused the crash.