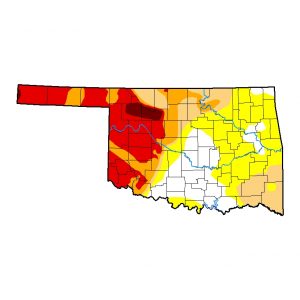 The latest drought monitor report for Oklahoma shows improved conditions, especially in northwestern Oklahoma. But one weather expert is talking of “flash drought.”

The state has no exceptional drought, which is the worst conditions under the drought monitor categories. The second worst category, extreme drought, shows a slight increase to about 9 percent of the state.

Most of the state is under abnormally dry conditions at about 74% while at least 52% is under a moderate drought.

More than one-fourth of the state is under a severe drought, down slightly in the past week.

State Climatologist Gary McManus attributes improvements to rainfall totals of 200% improvement in rainfall in the past 30 days.

“Even more impressive is the 13-plus inches that fell in the last two months in Alva and 10-plus inches in general across Woods and Alfalfa Counties,” he wrote in a Mesonet update. “That has led to some downright wonderful changes across the far northwest corner and into the Panhandle over the last month.”

However, he also noted that there are some hot spots in the state that could show rapid drought development along the Red River, the far northeast and southeast and the tip of the western Panhandle.

“We’re watching for rapid drought development as we bake under the summer sun, even as Mother Nature shut off the spigots in those areas,” said McManus. “And it’s really going to be a troubling time for those folks that have gone a significant time without good rains because the forecast for next week is DRY and HOT!”