Gasoline prices move upward in Oklahoma and most other states

Environmentalists set to fight Kavanaugh’s nomination to the Supreme Court 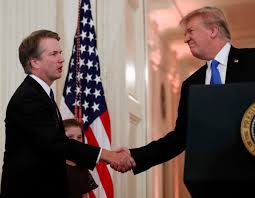 Within minutes of President Trump’s nomination of Federal Appeals Court Judge Brett Kavanaugh to the Supreme Court, environmentalists were bashing the nomination and urging it to be rejected by the Senate.

Take for example the Sierra Club.

“If the Senate lets Trump successfully install Kavanaugh to fill this seat, the court will rubber stamp Trump’s agenda for decades to come — no longer functioning as a check against political abuses of power and attacks on bedrock clean air and clean water laws, which is needed now more than ever,” said the organization in an email to its members.

Courtney Hight, Director of the Democracy Program at the Sierra Club sent the notice less than an hour after President Trump’s announcement.

“This is exactly the right-wing bench Trump wants to build to roll back our progress, gut Roe v. Wade, strip individuals of their voting rights, attack equality under the law, gut our environmental laws and repeal affordable healthcare.”

She urged Sierra Club members to communicate with their senators “asking them to hold the line against Brett Kavanaugh’s nomination.”