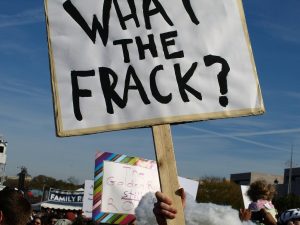 Millions of dollars are being spent on an anti-fracking fight in Colorado where petitioners hope to have a statewide vote in November.

The focus of the fight is Initiative 97 which would push setback requirements for new wells to 2,500 feet from neighborhoods. That’s 5 times the current restrictions of 500 feet from homes.

“The reason we’re doing this as communities is we’re our own last line of defense,” said initiative 97 organizer Suzanne Spiegel.

It’s a move opponents say would halt drilling in the state and have significant economic impacts. It’s not the claim of just the industry. Even one state agency now says if the measure is approved by votes, it will put most of the state off limits to such drilling.

“This initiative is economically devastating to the state of Colorado,” said Protect Colorado spokeswoman Karen Crummy. “Not only would it cost thousands of jobs, but it would cost billions in actual economic impact.”

Oil and gas companies are dumping a lot of money at Protect Colorado. Since January, the industry has contributed $8.4 million. Anadarko Petroleum wrote at check for more than $2 million while Noble Energy and Extraction Oil and Gas gave another $4 million May.

“We are the largest oil and natural gas producer in Colorado, directly employing more than 1,000 Coloradans and investing hundreds of millions of dollars each year in the state to develop the resources we all use every day,” said Anadarko spokeswoman Jennifer Brice. “The financial support provided to these industry coalitions is available to the public and essential in providing information to voters about the benefits our industry provides to the state and supporting the livelihoods of the thousands of people and dozens of communities that depend upon our business.”

Technically, Initiative 97 is the Colorado Minimum Distance from Occupied Buildings Requirement for New Oil and Gas Projects. It has yet to be put on the ballot since signatures are still being gathered.

Two versions of the initiative were filed and one was withdrawn in April. It was version #163 which not only required a minimum distance of 2,500 from occupied buildings but also from “other areas designated as vulnerable.” The vulnerable definition included playgrounds, permanent sports fields, public parks, amphitheaters, irrigation canals, reservoirs, lakes and rivers.

A group called Colorado Rising is the leader of the campaign for Initiative 97.

Carl Erickson, chairman of Weld Air and Water and Democratic candidate for Board of Weld County Commissioners said, “We have large areas in Weld County and elsewhere in Colorado that they can easily put drilling pads without encroaching on a 2,500-foot setback. What it does is cut down on the amount of close-in drilling to residential areas. We want to keep oil and gas drilling away from populations.” Erickson also said that the initiative would not stop agreements with individual property owners who would allow oil and gas companies to drill closer.

Fighting the measure is the Colorado Association of Mineral and Royalty Owners whose president is Neil Ray. He says the measure would harm Colorado’s 600,000 mineral rights owners. His group found a Weld County field with untapped minerals might have a value of $180 billion with royalties for owners amounting to more than $25 billion.

“Not only do these estimates represent a staggering value that could be taken without compensation from mineral owners by proposed ballot initiatives, but they represent funds taken from tax coffers that fund schools, roads, and other community services that we all value,” said Ray, who also holds a leadership position with Vital for Colorado, an industry-funded, dark-money organization out of Denver. “Even a section with low-producing wells still would generate over $200 million in royalties alone. Our cities, counties, and state simply cannot afford to compensate mineral owners for their property.”